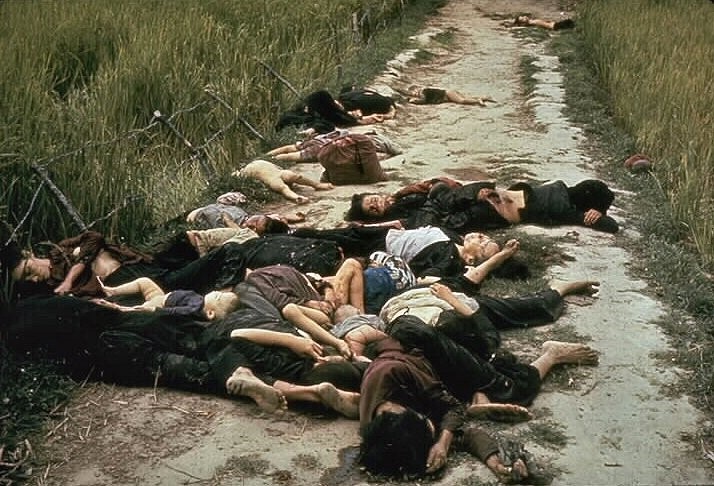 When we are faced with actions that clash with our moral compass, conflict occurs.  The three choices for dealing with conflict are fix it, accept it, or leave it.  A dramatic demonstration follows showing how actions during a conflict of moral ethics affected the entire world.

After the Tet Offensive in Viet Nam, American forces repelled the North Vietnamese Army.  In the process, Army units swept through villages to root out remaining enemy combatants.  Their purpose was to drive the enemy out of South Viet Nam.  The conflict began when elements of the Army decided it was necessary to “waste that village” known as My Lai.  Army forces under the command of 2nd Lt. William Calley killed many non-combatant villagers.  The person who gave the order to “waste” non-combatants  remains unclear.  It is clear that Calley’s platoon engaged in the massacre.  They did not recognize the ethical conflict or were just “following orders”.  They had “accepted” the situation.

Hugh Thompson was an Army helicopter pilot flying an OH-23 helicopter over the My Lai area.  He observed non-combatants who were dead and more being pursued by Army units.  Refusing to accept the carnage, he chose to “fix” the problem.  He landed between the non-combatants and the Army troops.  After landing, he ordered his helicopter crew to fire on any Army units that fired on him or the non-combatants.  Subsequently, he radioed for assistance and evacuated injured non-combatants.  His warning to higher command caused them to halt the operation.  Otherwise, many more would have perished unjustly.

An Army photographer named Ronald Haeberle took photographs of the carnage.  The picture above is the iconic photograph “Bodies on Trail”.  The Cleveland Plain Dealer newspaper published it.  The investigation of the My Lai massacre and subsequent Court Martial trials of two junior officers was major news world wide.  Public support for the war in Viet Nam suffered dramatically.

It is often difficult to “fix” an ethical conflict.  It is especially difficult when the order comes from the boss.  There are no guaranteed “winning” strategies.  Only options with consequences remain.  If one cannot “fix” the conflict, one might “accept” it.  But even that choice if fraught with danger and potential disaster.  If one can’t “fix” it, and can’t “accept” it, the only honorable choice left is to “leave it”.  Refusal to participate is a valid option when no others are available.  Every way you turn, ethical conflict leads to negative consequences.

One option that people often choose is not to fix, accept, or leave the situation.  Instead, they stay and bitch about it.  This is cancer to both the complainer and the organization.  It drives despair into the organization.  Leaders should excise it rapidly to limit damage to others.